The federal government has ordered the Inspector General of Police, Mohammed Adamu, to provide security for the 17 Edo All Progressives Congress (APC) lawmakers.

Minister of Justice and Attorney General of the Federation, Abubakar Malami, gave the order in a letter.

It followed a petition to his office by Idahosa-West Chambers.

Malami explained that the directive became necessary to prevent the breakdown of law and order.

The APC legislators are loyal to the former national chairman, Adams Oshiomhole, and the governorship candidate, Osagie Ize-Iyamu.

On Thursday, they clashed with lawmakers loyal to Governor Godwin Obaseki.

Obaseki has vowed to deal with perpetrators of violence.

He indicted Oshiomhole, his predecessor, for the Edo Assembly change of leadership and turmoil in the state. 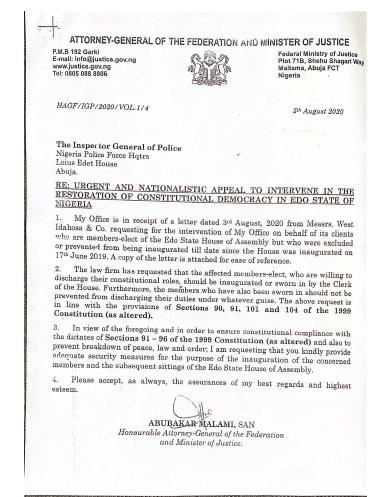 BBNaija: I Did Not Wash Vee’s Pants, I Rinsed It – Neo Clarifies